Adam Sandler responds to the viral security footage of himself and his daughter leaving IHOPs after being told there was a 30-minute wait for seating.

A hostess at IHOP revealed that she had unknowingly turned Adam Sandler and his daughter away in a viral TikTok that has garnered upwards of 11M views so far. A hostess at Manhasset International House of Pancakes shared a TikTok explaining that a masked Sandler walked in and was informed that there would be a 30-minute wait.

“Not realizing its Adam Sandler and telling him it’s a 30min wait and him ofc leaving bc he’s not going to wait 30mins for IHOP,” hostess Dayanna Rodas captioned the TikTok. Sandler’s publicist later confirmed to HuffPost that it was the actor.

Sandler took to Twitter with a comedic take on the clip. Apparently, it wasn’t the 30-minute wait that turned him off. “For the record, I only left the IHOP because the nice woman told me the all-you-can-eat deal didn’t apply to the milkshakes,” he wrote on Twitter.

Rodas told the New York Post that it was only after Sandler and his daughter left that she found out who he was. “It wasn’t until a customer walked in about 15 minutes later saying, ‘Adam Sandler was outside,’ when I realized I spoke to Adam Sandler!” she said.

Clearly, Adam Sandler isn’t stressing the encounter. Hopefully, he was able to find a place with half the wait time. Check his response below. 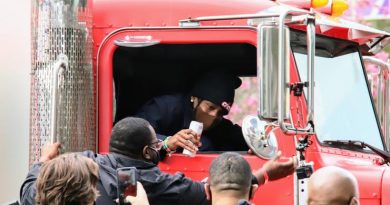