Cardi B calls out Donald Trump and his army of bots for infiltrating her page.

Now, more than ever, it is important for us to allow our voices to be heard by voting. Primaries opened up in nine states yesterday, allowing people the opportunity to express the change they would like to see in the world.

Cardi B has shown an interest in politics in the last couple of years, using her platform to endorse candidates and speak about how important it is to get out to the polls. Shortly after she told her 67-million followers to register for the 2020 election, the rapper took notice of how many bots were flooding her comments, supporting Donald Trump. She followed up the post by calling out the President and his bots.

“Just like alot of these celebs this guy got BOTS TOO,” she wrote. “Look at all these BOTS under my last post.”

The previous post showed a trio of Trump tweets, including one urging Republicans to vote in the primaries.

Is anybody really surprised that a bunch of fake accounts are running with Trump? That’s honestly the least shocking piece of news regarding him that has circulated in the last week.

If you haven’t already, make sure to get out and vote so that we can finally see the change we want in the world. 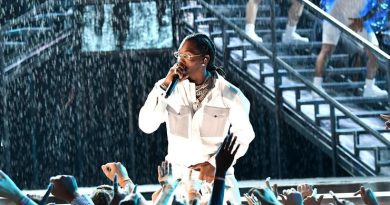 Offset Claims He Brought Jordans And Nikes Back In Style