Meechy Darko of the Flatbush Zombies confirms that his previously-announced solo album is nearing completion.

The Flatbush Zombies have earned praise as one of the game’s most consistent crews, having made strong impressions on projects like Vacation In Hell, Beast Coast’s Escape From NY, and their latest release Now, More Than Ever. And while many have been anticipating another full-length drop from the collective, it would appear that Erick Arc Elliott, Zombie Juice, and Meechy Darko have been taking the time to work on their respective solo careers.

While we recently saw a new release from Elliott, who showcased a different side of his artistry with Future Proof, there has been a heavy demand for a full-length release from the explosive and dynamic Meechy Darko. Evidently, it would appear that the time is indeed coming, as Meechy has been steadily crafting his own upcoming solo album. In fact, the gravelly-voiced emcee took a moment to share a status update on his Twitter page, writing a concise but telling “Album almost done.”

Though he neglected to share any additional details surrounding the project, he doesn’t exactly need to as the hype speaks for itself. Many Flatbush Zombies fans have long wanted a substantial project from Darko, who has frequently stolen the show on no shortage of tracks. It will certainly be interesting to see how he approaches crafting his solo debut, and whether or not he reaches out to his Beast Coast collaborators for assistance.

He might very well have to, considering that many of his peers may very well be afraid to hop on board. “Im starting to think ni**as scared to rap with MEech,” he tweets. “I don’t even wanna just say that to say it but i really feel that everytime I play a song or ask a Ni*ga to jump on the album it get awkward.”

Check out his recent album-centric tweets below, and stay tuned for more news on Meechy Darko’s upcoming project.

Steph Curry Speaks Out On Warriors Playing Without Fans 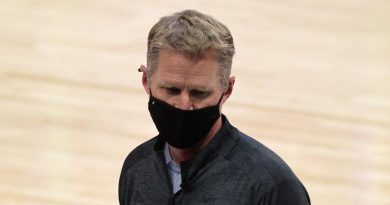