They are reportedly working on a pill that people can take at home to avoid hospital visits.

People gave Pfizer the side-eye when it was shared that a third dose of the COVID-19 vaccine may be needed in six months to a year, but the company’s CEO claims they are working on an even more effective solution. Albert Bourla spoke with CNBC yesterday (April 27) to discuss the controversial vaccines and was asked if there were going to be alternative, possibly more permanent solutions in the future, like a pill that the public can take.

“If all goes well, and we implement the same speed that we are, and if regulators do the same, and they are, I hope that by the end of the year,” said Bourla.

He shared a bit of insight into what they have been developing at Pfizer. “One of them is you don’t need to go to the hospital to get the treatment,” he added. “You could get it at home. That could be a game-changer.” This new form of treatment is currently in its “early-stage clinical trial testing a new antiviral therapy for the disease,” according to CNBC.

The outlet added that “the drug is part of a class of medicines called protease inhibitors and works by inhibiting an enzyme that the virus needs to replicate in human cells.” There have been multiple reports worldwide of several other variants of COVID-19 being discovered, leaving concerned citizens to wonder if their vaccine will protect them from new strains.

Bourla also told the outlet that this pill form has the possibility of being “way more effective against the variants.” Watch Bourla’s feature with CNBC below. 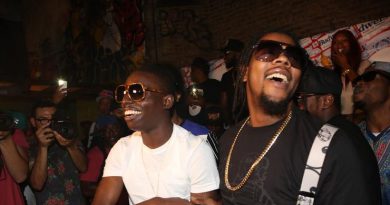 Eve Having “Uncomfortable Conversations” With White Husband About Race