Ray J dissects some of the lyrics about him from Kanye West, City Girls, Eminem, Method Man, and more.

Ray J has had a pretty crazy life. The “One Wish” artist has constantly made headlines because of his antics in real life and on social media, especially as it pertains to his past relationship with Kim Kardashian. If there’s one thing that the younger generation knows about Ray J, it’s that he “hit it first”, as he seemingly loves to remind us. The artist stars alongside Kim Kardashian in the sex tape that many attribute her current fame to.

He’s had some fun moments over the years, making him one of the most popular punchlines in rap music and getting mentioned in songs by Eminem, City Girls, and, of course, Kanye West. On a new episode of Between The Lines with Genius, Ray J explained some of the references that artists have made about him.

Speaking to Kanye’s line about him on “Highlights”, Ray J hilariously reacted and said that he’s down to be friends with the legend. “That’s what it say in the song? No it don’t! That was cool, it’s like he’s having a conversation,” said Ray J, hearing the full lyric for the first time. “I didn’t know it said all of that. I thought it ended after the b-*-t-c-h line. I mean, listen, Watch the Throne is one of the greatest albums of all time, hands down. And the concert, that was some of the craziest sh*t and one of the most simple creative masterpieces I’ve ever experienced. Maybe we might need to be friends now! Everybody need to just put all our sh*t behind. It’s 2021, it’s all love over here. Let’s bring the love together.”

He also comments on Eminem’s bar on “Godzilla”, saying, “Man, you always wanna get an Eminem mention. I don’t know, that’s at the highest level of it. Somebody get Eminem on the phone. Let me say what’s up and let me soak up some knowledge real quick. Let me come learn some sh*t or give me some goddamn publishing!”

Ray J also spoke about a few lines from the City Girls, asking them to collaborate with him on his new album.

Watch the new episode above. 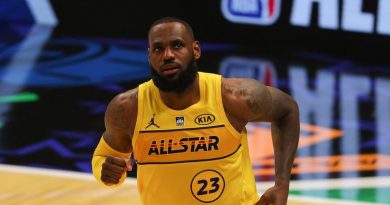