According to the criminal complaint, Wharton beat his girlfriend so badly, she had several gashes on her head and face. Police say her injuries were so severe, she had to be taken to the hospital where she was diagnosed with a brain bleed. Some of the domestic incident was captured on the couples “RING” doorbell system.

When Officer Wharton arrived for his shift at an area substation Rio Rancho Police officers were waiting for him armed with a felony warrant. At one point you’ll see they removed his duty belt and searched him. After the search they are seen on lapel video cutting off his fully marked uniform shirt. Wharton was lead out of the substation to a waiting cruiser.

Man Gets Fatally Shot By South Beach Police After He Reportedly Stabbed One Of Their Own! 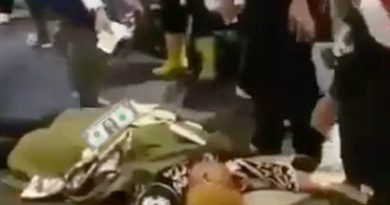 The Holy Hustle: Every Sunday After Sermon This Pastor Dies & Can Only Be Resurrected When Given Enough Money!